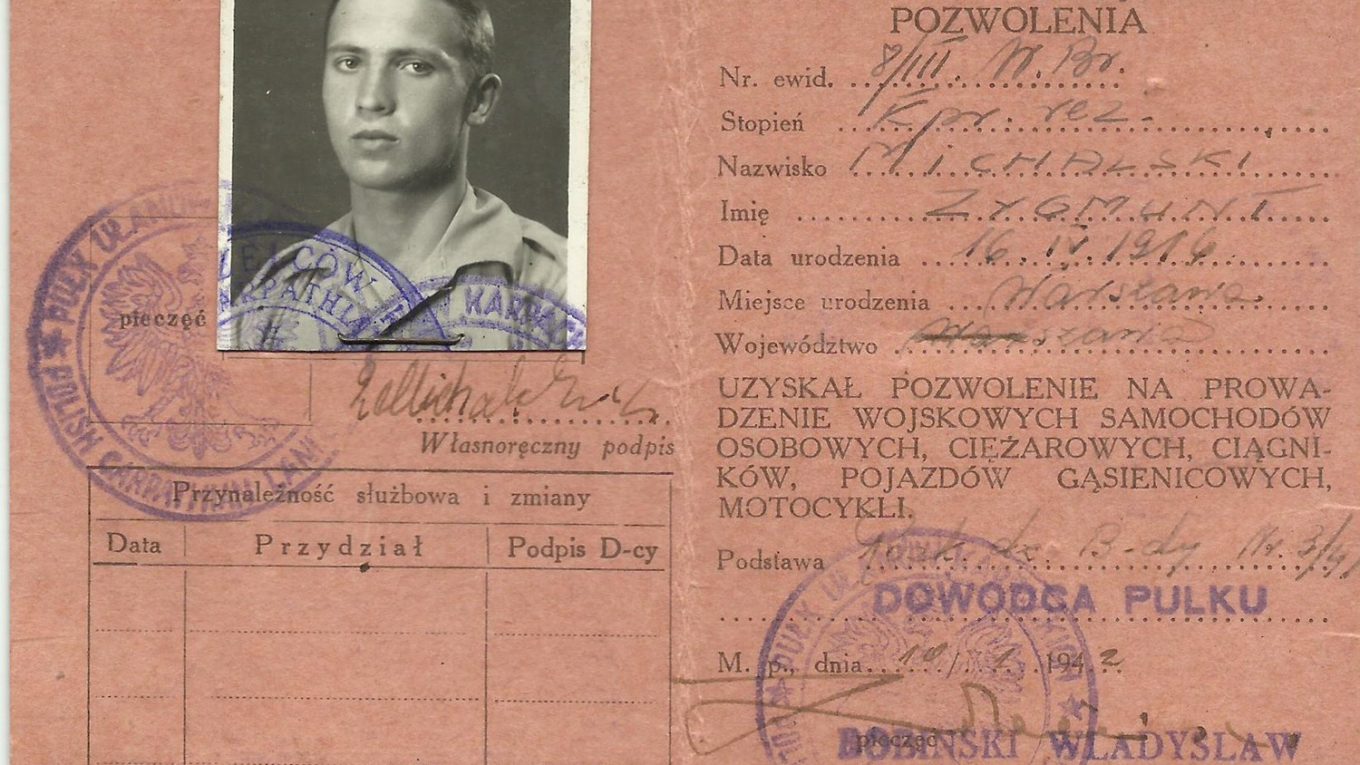 (16.IV.1916 – 19.V.1944)
Soldier of the Polish Army from September 1, 1939 to May 19, 1944, where the 2nd Polish Corps, and within it the Carpathian Regiment conquered the Monte Cassino monastery hill, Passo Corno.
He laid down his life on the slope of Passo Corno and was buried like his 1072 comrades in the 2nd Corps at the Montecassin cemetery.
He was born in Warsaw, acquired the profession of a locksmith, and performed basic military service in the 4th Armored Battalion from 15.08 1936 to 20.09. 1938 as a tank gunner. In the army, he obtained truck and motorcycle driver qualifications with a “good” rating.
In September 39, he was directed to evacuate the Ministry of Military Affairs and crossed the border in Kuty to the internment camp in Romania in the evacuation column.

Escape from Bucharest internment camp to the port of Constancy and embarking on the ship “Bessarabia” along with other candidates for the army, refugees and refugees from occupied Poland. Necessary documents, passports, visas, funds, and renting the ship are handled by the Polish embassy in Romania. The ship with Polish passengers flows through the Black Sea, Dardanelles and the Mediterranean Sea to Beyrutu in Lebanon.
There is a Polish – French Zborna Station operating in Beyruta, which recruits to the Polish Army being formed the Independent Carpathian Rifle Brigade under the command of Colonel Kopanski. The camp of the forming Brigade is the city of HOMS in Syria, and then after the surrender of France in May 1940, the Brigade goes to Latrun in Palestine managed by the British.
1941 fought to defend the Tobruk Desert Fortress for four months and rejected the advancing Afrika Corps and the Italian army from Cyrenaica in Libya. The brigade is visited by Chief General Sikorski and honors soldiers for courage and dedication with Virtuti Militari crosses and Crosses of Valor. Michalski receives the Cross of Valor and praise in writing from the commander of the regiment Major Bobiński: “This action was the first victory of the Polish army in 2 years. That is why, despite its small size, this action is of great importance and spread widely … ”.
1942 was a service in the protection of the Nile Delta in Egypt and the transformation of the Brigade into the 3rd Division of the 2nd Corps of the Polish Army under the command of General Anders.
1943 was an intensive training and arming the Corps with modern American armored equipment. Michalski goes through an armored weapon instructor course on “Staghound” vehicles. “Ogar” are heavy armored cars with an inch cannon. 76mm, which the Carpathian Regiment is equipped with as a division reconnaissance unit.
1944 transported the regiment by ship “Batory” and landing in Taranto / Italia /. Coming in battle to the “Hitler” line in the Monte Cassino massif.
The 2nd Corps receives the task of breaking the German resistance line. In the assault, the Corps suffers huge losses in killed and wounded. Michalski, whose last moments were described by Adolf Bocheński in the article of the White Eagle “conquering Passo Corno-893”, is also killed:
“Corporal Michalski, assigned as a chaplain’s cover, fell in this fight, but at one point he shouted that he could not bear it and flew into the fight and died.”
The chaplain is priest Jan Malinowski, known for his service and care for wounded on the first line of attack and the squadron leader, he gave protection to the chaplain.
Posthumously, the commander-in-chief, General Sosnkowski, granted Michalski Zygmunt the Silver Cross of the Virtuti Militari order.
The war biography of Zygmunt Michalski was written on the basis of his own notes and war documents obtained from the archives of the British Ministry of Defense.