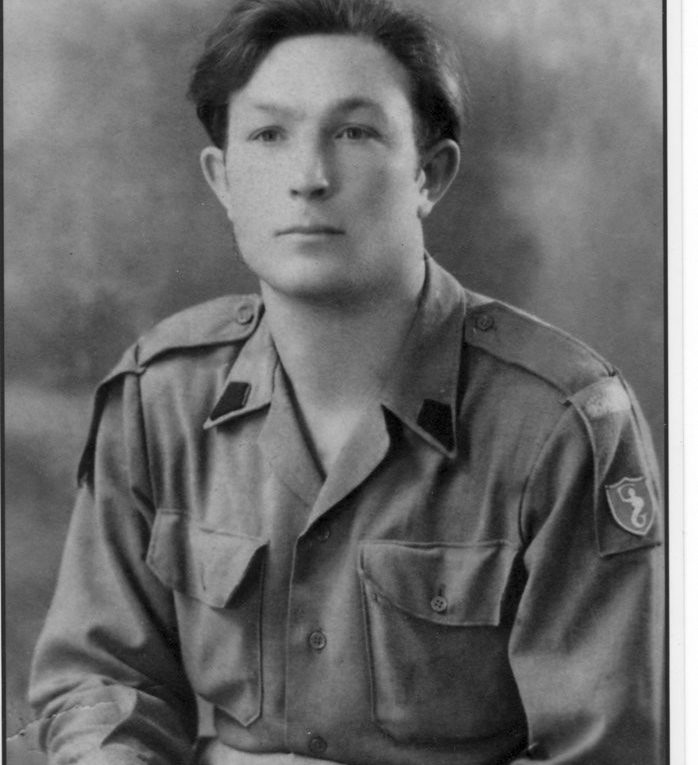 Marian Lemieszek born on 16.07.1920 in Sutno, area Bielsk Podlaski Province Bialystok. Before the deportation he lived in Wieliczkowice, commune Wołczyn in the Brest poviat, where his father was a gamekeeper. He and his family were deported by the Soviet occupier in the first mass deportation on February 10, 1940, to the far north of Russia. On the “inhuman land” in the vicinity of Arkhangelsk, to the Chołmogorski District, to Word’s deputy.

With Anders’ army he was in Iran, Iraq, Palestine, Jordan, Egypt, and in 1944 he reached Italy.

He was assigned to the 2nd Artillery Group of the II Polish Corps. Its commander was Colonel (Brig. Gen.) Ludwik Ząbkowski. And as an artilleryman, Marian Lemieszek, with the rank of bombardier, took part in the fight for Monte Cassino.

During the Italian campaign, in addition to the duties arising from the position, he also served as the commander’s driver. What the document is issued is a driving license.

There are also two commemorative photographs depicting my grandfather as a chauffeur bantam BRC so. jeep.

Grandpa was awarded for merits, among others Commemorative Badge of the 2nd Artillery Group (Army Artillery Group) – a large artillery unit of the Polish Armed Forces in the West in 1943-1947. Approved Journal Distributions. Commanders of the 2nd Corps No. 103, item 601 of 17 September 1946, the badge has the shape of a Monte Cassino cross. A circular laurel wreath is applied to the cross. In the center there is a mermaid and an artillery shell pointing downwards, which connects to the sign of the 8th British Army. The remaining space of the circle is filled with rays from a fan-shaped shield imitating a bullet explosion.

Badge of the 11th Heavy Artillery Regiment, unfortunately lost somewhere near the house. Grandpa sometimes pinned her to the jacket feeling proud of having it. In the pictures below I presented this particular badge, but unfortunately from an online source (Wikipedia)

Having survived this bloodiest battle in the history of the Second Corps, he went up the Italian “shoe”. Adriatic Front. Through Ancona, the Goth Line, up to Bologna where at the end of April 1945 his war adventure ended.

Instead, he was awarded the commemorative badge of Monte Cassino by Ancona Bologna.

Another medal my grandfather had was the Army Medal.

In 1946 he was transported with the whole Corps to Great Britain.

When it was necessary to leave the transit camp in Scotland in 1947, my grandfather thought about returning to “free Poland” for a long time. As he said – after two sleepless nights, walking constantly on the barrack, thinking for a long time, he decided to return to the country. He boarded the ship sailing to the port of Gdynia, being aware that being an Anders soldier he would not have lightly in the country for the freedom he fought. As he said, he wanted to come back because he did not know what was happening to his relatives – father, mother, siblings. If he stayed, he wouldn’t know about it, and certainly not very soon. When the ship returned from shore, letters began to be distributed. Among them was a letter to him. A letter from the family home. He got news that everything was fine at home. Everyone is alive. In this situation, his decision to return proved to be not entirely good. Unfortunately, the ship has already docked. There was no return to life in the west … He returned and settled in Białcz, commune Witnica area Gorzów Wlkp. He founded a family. Together with his wife Kazimiera, they survived 53 years, raised five children.

Unfortunately, on May 27, 2002, an unfortunate road accident shortened his life.

The proud of his family did not forget about his merits as a soldier, as evidenced by the inscription on his tombstone …

We invite you to view the photo gallery: