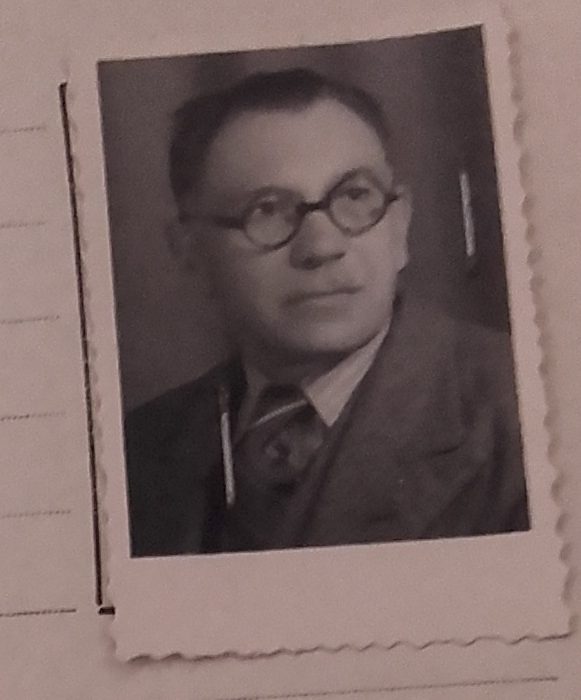 He was born on October 13, 1900 in Krakow.
He graduated from the 4th grade of the elementary school in Biała, then the 4th grade of the middle gymnasium.
1918 he passed his high school diploma at the Junior High School in Biała.
1918 took part in the fight for independent Poland near Lviv.
He was awarded the Medal of Homeland to his Defender for the 1918-1921 fight
He worked as an official of the Bank of National Economy.
On August 5, 1923, he married Adela Miodońska, they had 3 sons: Wiesław (born on September 5, 1924), Zbigniew (born on April 6, 1926), and Bogusław (born on September 4, 1929).
The last residence of the Skutów family before the war is Równe ul. Idzikowskiego 17.
He was awarded:
Homeland Medal to its defender for the war of 1918-21,
in 1930, the medal of the decade and the medal for the service of years,
Independence Cross with Swords in 1938.
He was mobilized on August 1, 1939. He spent the first two years of the war in the USSR.
From September 4, 1941, he was incorporated into 19 p. IIDP.
In April 1942, the Carpathian Rifle Division (DSK) was established in Palestine, joining the Independent Carpathian Rifle Brigade and units of the Polish Army arrived from the Soviet Union under the joint command of General Stanisław Kopański. The chronicle said about them: “Their moral condition was very good, the health was uneven. Next to completely healthy people who had tolerable living conditions in Russia, they were devastated by staying in Soviet prisons and labor camps, which, however, saw rapid improvement due to changed living conditions. 15/17 (…) The goal was to train DSK to fight in modern conditions, with particular attention to the fight in the mountains and in the desert. “From the chronicle https://pl.wikipedia.org/wiki/3_Karpacki_Batalion_Ciężkich_Karabinów_Maszynowych

May 13, 1942, included in the Commander’s Reserve of the Polish Army. That day he came to Palestine.
On June 1, 1942, he was transferred to the 3rd Carpathian Infantry Division and assigned to the 7th Battalion of the SK.
July 25, 1942 was verified as a platoon reserve.
In August 1942 he completed a course of departmental hygienists.
On November 10, 1942, he was transferred to the 3rd Battalion of Heavy Machine Guns.
On November 15, 1942, in a car accident, he broke his arm and was hospitalized.

On February 23, 1943, he was assigned to 4 companies, and in the Battalion of Heavy Machine Guns he was transferred to the company command as an accounting soldier’s shop.
On May 18, 1944, he participated in the Battle of Monte Cassino.
Anders’ army took part in the famous battle of World War II at Monte Cassino. It was Poles who broke the resistance of the Germans defending the monastery hill. Attacks by Englishmen, Americans and Frenchmen failed. The bombing of the monastery by the Americans served the Germans rather than hindered their defense of the hill. Finally, it was the turn of the Poles. Mr. Edward Skut wrote on his postcard: “It was very hard to fight here, I had to backtrack with people twice, until English tanks started chopping densely. It was only us who started giving the swabs to the broad beans. We smashed the Swabian many times, but we also suffered a lot. “Finally, on May 18, 1944, among the ruins of the Benedictine monastery, the Polish flag fluttered and the Marian bugle call sounded.
On April 7, 1945, he was promoted to sergeant.
After the end of World War II, his battalion served guard duty around Cesena after the end of World War II
He received awards:
Bronze Cross for merits with Swords for the first time November 24, 1945
December 26, 1945 Star for the 1939-1945 war and Star of Italy
April 16, 1946 Army Medal for the first time
He completed the repatriation questionnaire in 1948. He returned to Poland to Olsztyn.

The project, which resulted in findings on the war path of Sergeant Edward Skut, was implemented at the Family Covenant School. John Paul II in Warsaw in the 2017/2018 school year.