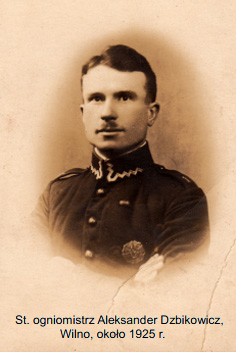 Aleksander Dzbikowicz was born on January 29, 1896 in Jeżów Birch. On 10 August 1914 he joined the Polish Legions; first assignment: 1st Brigade, 1st Regiment, 1st Battery, 3rd Company. During his service in the Legions, he took part in the following battles: at Opatowiec, at Czarnków, at Laski, at Brzechów, at Kozinek and at Przepiórów. He was wounded in the Battle of Konary on May 27, 1915, on March 5, 1917, because of his wounds he was temporarily unable to serve. Quote from the Legionowa file: “On superarbitration of 5 / III 917 in Przemyśl, deemed temporarily incapable of service, he is to be sent to the House of Healers.” On July 22, 1917, he was interned in Szczypiorno. On 12 October 1918, he joined the Legions again and then served in the Polish Army, mainly in artillery. 1920 – received the Badge of Internment in Szczypiorno; 1932 – decorated with the Legionary Cross; 1933 – decorated with the Cross of Independence. On October 15, 1925, he received a military retirement and was retired. 1938 graduated from the University of Warsaw and obtained the title of veterinarian. On September 1, 1939, he was appointed to the Military Service as a senior chief, assigned to the Training and Veterinary Research Center. At the end of September 1939, he was interned in Romania. Return to Poland in mid-1940. In 1944 he was arrested by the Germans and taken to the Duisburg-Hamborn camp in Germany. In November 1945 he returned to the country. Then he worked, among others as a Poviat Veterinary Doctor in Turku in the voivodeship Poznan. He died on January 1, 1956.